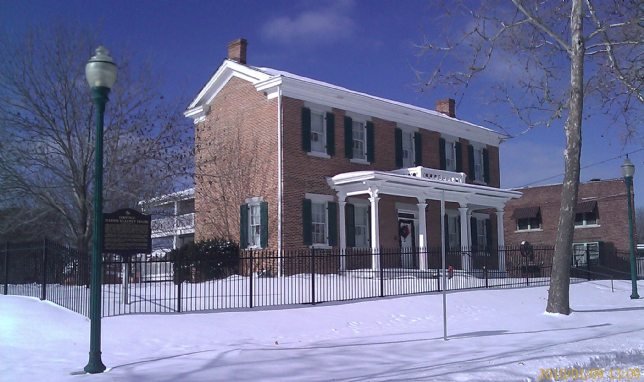 Step back in time to the vibrant years of 1850s Westport when you visit the 1855 Harris-Kearney House, Kansas City's oldest surviving residence. Listed on the National Register of Historic Places, this handsome two-story brick mansion has been accurately restored to its pre-Civil War appearance. Visitors will marvel at the beautiful hand carved Black Walnut staircase and fireplace mantel, and experience the daily lives of a pioneering family in West Port.

The home museum is a nationally certified site and partner on the historic of the Santa Fe, California, and Oregon Trails. Overlooking the bustling 3 trails when it was built in 1855 by Col. John Harris, this Greek Revival mansion bore witness to the flood of traders and pioneers headed west. Later, during the Civil War, John Harris and his family were forced to flee when West Port and their home were occupied by Union Forces under infamous Col. "Doc" Jennison.

During the 3 day Battle of West Port in October, 1864, the walls of the mansion rocked from the concussion of Confederate and Union cannon while several Harris grandchildren watched the battle from the second floor windows. Union commanders, under the direction of General Curtis, headquartered at the Harris House Hotel and observed the battle from the roof of the hotel.

The Westport Historical Society celebrates and commemorates the 19th Century when Americans journeyed West to chase their dreams. Many chose the town of West Port as the point where they "jumped off" onto the trails and into the great American Wilderness. The Westport Historical Society actively preserves the unique moment in history of the great Westward Migration and the bloody Civil War by sharing the stories of how Kansas City began and by educating the greater Kansas City community of West Port's role in the shaping of the society in America.