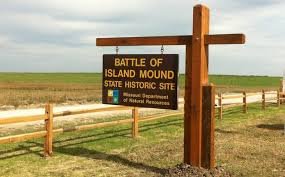 Visit the site of the first engagement of African American troops during the Civil War. Take a short walk on the trail and learn about the regiment that made U.S. history.

The Battle of Island Mound marked the first time that African-American troops were engaged in Civil War combat, nearly a year before the battle depicted in the film Glory. Battle of Island Mound State Historic site encompasses Fort Africa, where the 1st Kansas Colored Volunteer Infantry were camped in 1862 before a pitched battle with pro-Confederate forces near a low hill named Island Mound.

Walk the interpretive trail loop and learn about this battle as well as the effect that the 1st Kansas Colored Volunteer Infantry has on later Union decisions to allow African-American units to fight. A memorial monument and interpretive kiosk explain the battle and a .6 mile long trail includes interpretive panels; there is also a picnic shelter, picnic pads, vault toilets, water faucets and taps.