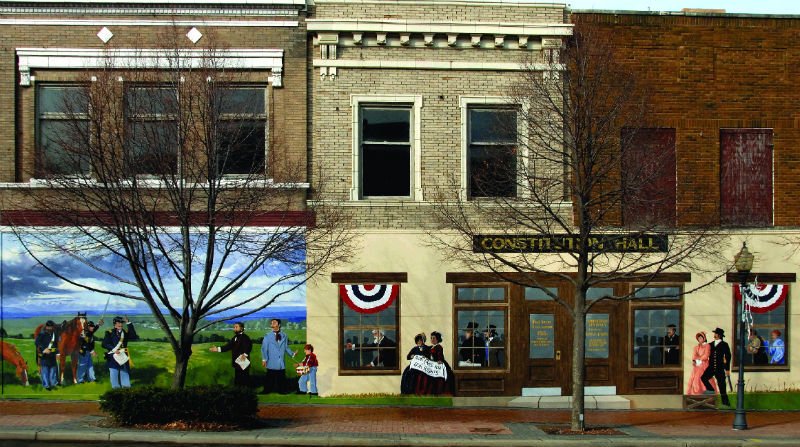 Here in Topeka in 1855, delegates elected from across Kansas Territory banned slavery in the Topeka Constitution for Kansas statehood. This opposed the pro slavery, federally appointed Territorial government in nearby Lecompton. Visit both sites and the Kansas Statehouse.

On the National Register of Historic Places for "well-documented and highly important events of national significance that focused the nationwide attention of slavery proponents and abolitionists on the issue of Kansas sovereignty and territorial law. The issue became one of the nation's leading and most widely debated political crises in the years prior to the Civil War, and this property alone represents the important events related to the free state movement and the drafting of the first antislavery constitution took place in Topeka between 1855-1860." Constitution Hall became part of the first Kansas Statehouse in 1864. In 1869, state government moved to the East Wing of the present Statehouse on Capitol Square at 8th and Van Buren. Since 2001, Constitution Hall-Topeka is a partner site of the National Underground Railroad Network to Freedom Program, National Park Service.

Constitution Hall is undergoing phased restoration for use in heritage tourism about the Kansas Free State movement, the Jim Lane Trail, the July 4, 1856 Dispersal of the Free State Legislature and early Kansas statehood. The west and south walls were restored in 2012. Facade restoration is in planning.

The Free State Topeka Constitution declared "There shall be no Slavery in this State." This narrowly passed the U.S. House of Representatives. Pro slavery leaders prevented passage in the Senate.

Constitution Hall was the southern terminus and base of operations for the Jim Lane Trail, a critical free trade and escape route to freedom in the North.