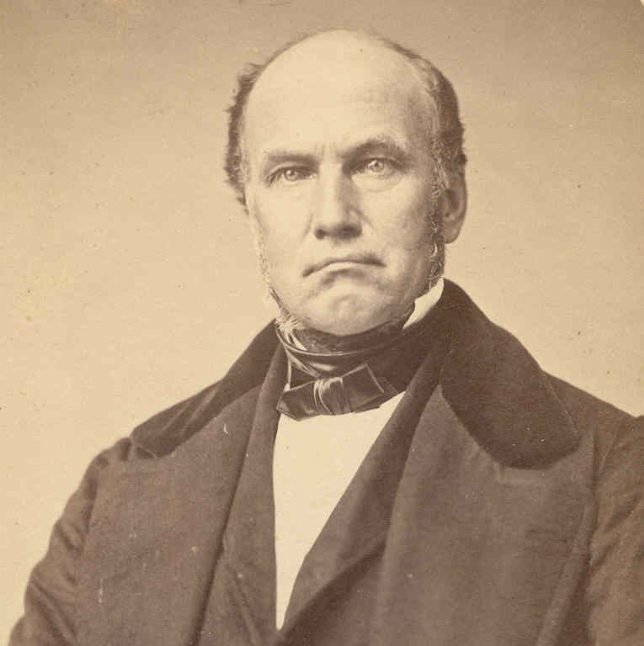 This research library has primary source documents and information about George Park, Parkville, Missouri, and the destruction of the Industrial Luminary newspaper.

Vermont native George Shepard Park, for whom both Parkville and Park University were named, began acquiring land in the newly opened Platte Purchase as early as 1840. In 1844, Park officially filed his hand drawn plat of Parkville and in 1847 completed his first survey.

Mr. Park was convinced that the area, located on the banks of the Missouri River, was perfect for commerce and would become an ideal gateway to the west. The inhabitants of the town were incorporated in 1849, and by 1851, its boundaries had extended to the north and to the east. The first known Parkville ordinances were printed in George Park’s newspaper, The Industrial Luminary, on October 11, 1853.

At the time, Platte County was enjoying an economic boom because of the nation’s large demand for tobacco and for hemp; both were crops that thrived in the area’s rich, rolling farmland. Almost all the work necessary to grow and harvest the hemp plant was performed by slave labor and many farmers in the vicinity of Parkville were slave owners. The small town began to thrive as river traffic increased.

After the Missouri Compromise was repealed in 1854, Parkville and Platte County became hotbeds of contention over whether Kansas should enter the Union as a slave or a free state. The county was decidedly pro-slavery in general, but there were dissenters and others who could see both sides of the issue. George Park was in the latter category and advocated a conservative approach between what he called “...abolitionism and disunionism.” He also believed that only those who actually lived in Kansas should vote on the matter and he reacted strongly against the Missourians who crossed the river to vote illegally on March 30, 1855, ensuring that the result would be for slavery.

His resulting Industrial Luminary editorial enraged Platte County followers of the anti- abolitionist David Atchison and they swore vengeance on Park, his partner W. J. Patterson and his newspaper. On April 14, 1855, a pro slavery mob composed of Platte County men rode into Parkville, raided the Luminary office, removed the printing press and threw it into the Missouri River. Luckily, George Park was in Kansas on a business trip and escaped injury; his partner, however, was given three days to leave town or be hanged.

News of the destruction of the press was carried in newspapers all over the nation. It was used by abolitionist editors as yet another pro slavery outrage and used by the pro slavery papers as a blow against tyranny. The incident in Parkville became a flashpoint in the ensuing Border War.

By appointment only. Queries can be sent via email: carolyn.elwess@park.edu.