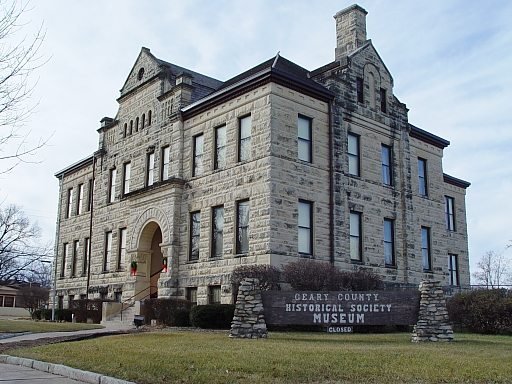 Long before the first white settlers arrived in Geary County, Kansas, this area at the junction of the Smoky Hill and the Republican Rivers was a choice location to the Indians. The Kansa (Kaw) tribe of Indians lived in a village here as noted by explorers with the Lewis and Clark Expedition. The Osage, Pawnee, and Wichita tribes also inhabited this part of the state. All of these Indians hunted buffalo and were farmers, raising corn, beans, and squash to live on. The nomadic tribes (Cheyenne, Comanche, Kiowa, and Arapaho) roamed the plains to the west and also were occasionally found here.

Chief Washunga of the Kaw Tribe was the last great chief to live in the Junction City area. The Chief Washunga photograph (on display in the Geary County Museum) and the one seen here were taken on Washington Street in Junction City by A.P. Trott, an early photographer, probably in the 1860s or early 1870s. An extensive collection of items donated by a society member, is on display at the museum.

Kansas and Nebraska Territories were organized by the Kansas - Nebraska Act, which was passed by Congress and signed by President Franklin Pierce on May 30, 1854. The boundaries of Kansas were established on the east at the Missouri line, on the north at the 40th Parallel, on the south at the 37th Parallel, and on the west at the "summit" of the Rocky Mountains.

Questions soon arose concerning the true western boundary of the territory. Land surveys for the Rocky Mountains were so incomplete that the actual location and direction of the "summit" was not definitely determined. Many maps show the western boundary of Kansas Territory as following the continental divide and including about 2/3 of the present state of Colorado.

A number of problems occurred during the late 1850s which determined a change in the western boundary of the territory. The first and foremost concerned the discovery of gold along Cherry Creek and the eastern slopes of the Rockies in 1858. This discovery brought a rush of gold-seekers into the western reaches of the territory. Because of the distance of the gold diggings from the territorial capital at Lecompton (in the eastern part of the territory), important decisions arising from land disputes and legal controversies were often delayed for weeks. It became such a problem that the enforcement of law and order was at times jeopardized. In addition, between the gold fields and civilization lay five hundred miles of unsettled lands populated by a number of Indian tribes that saw the encroachment of whites as a threat to their existence.

Realizing that justice could not be administered to the far western reaches of the territory in an effective manner, delegates of the Wyandotte Constitutional Convention chose the 25th Meridian west of Washington as the new western line of the proposed state and the boundary was accepted by Congress.

There are three floors of exhibits, both permanent and rotating. We have a wonderful gift shop where you can buy gifts for yourself or others. Learn Morse code, put together a trivia puzzle, try to pass an 8th grade test from 1895, and experience other adventures that will connect you to the rich history of Geary County.