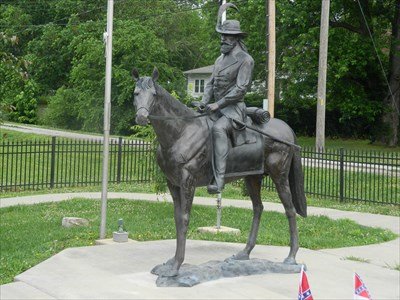 Visit this monument to Jo Shelby, the “Unreconstructed Rebel,” and only Confederate General to not surrender his troops. Learn about the history of Waverly, Missouri.

Joseph Orville Shelby was born in Lexington, Kentucky in 1831. He made his fortune nearly Waverly as a hemp farmer and slave owner prior to the Civil War. As part of the pro-slavery cause, Shelby participated in schemes to make Kansas a slave state. In 1861 he marched to Independence, Missouri, to prevent the occupation by U.S. Dragoons from Fort Leavenworth.

Captain Shelby took part in the famous Battle of Wilson Creek and was made a colonel after the Battle of Lone Jack. He raised his own regiment, which became known as the "Iron Brigade".

In 1862-63, he took part in the expedition against Springfield, also capturing the federal garrisons at Neosho, Greenfield, Stockton, Hermanville, Warsaw, Boonville and Marshall, Missouri.

During the fall of 1864, he captured Potosi, Missouri, destroying the railroad. After bloody fighting, he captured Boonville, Waverly, Lexington and California, Missouri. General Shelby's "Iron Brigade" also engaged in the battles of the Little Blue and Westport.

Missouri Confederates held General Shelby in high esteem and referred to him as the greatest Missouri soldier of the Confederacy.

He was appointed U.S. Marshal for the Western District of Missouri in 1893. A newspaper quoted a U.S. Senator's comments on Shelby's appointment:

"Nearly thirty years have elapsed since the termination of the war. All that one can ask, even the most loyal Unionist, is that the government shall not be confided to men who, during that awful time, represented not fair battle, but rapine, cruelty and chaos. We, or most of us, believe Jo Shelby belonged to the latter class. Still, we can do nothing to prevent the consummation of the outrage in making such a man the representative of law and order. All we can do is to enter our solemn protest."

Shelby cared more about the letter written by William Warner, ex Commander-in-Chief of the Grand Army of the Republic, which endorsed his appointment and congratulated him. And, Thomas Fletcher, former war governor of Missouri, personally told the Attorney General that Shelby's appointment as a U.S. Marshal was a sound choice.

During his tenure, the Great Pullman Strike occurred in 1894, which was one of the most famous civil disturbances of the 19th century.