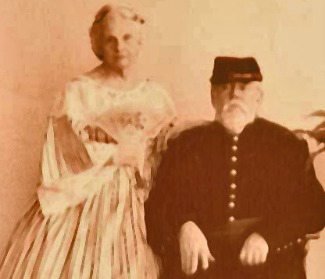 The German settlement of Humboldt, Kansas, was founded in 1857 near the Neosho River, by Free State advocates.

With the passage of the Kansas-Nebraska Act in 1854, guerrilla warfare broke out between the slave state of Missouri and the mostly antislavery settlers in Territorial Kansas. Humboldt was not active in the Border War and the controversy over whether Kansas would enter the Union as a slave or free state. The town was near Osage Indian land, and was vulnerable to attack from both guerrillas and hostile Indians who favored the Confederacy.

In 1861, with a divided nation at war, an infantry company was organized at Humboldt and ordered to duty in Missouri. On September 8, 1861, while the men were away, a band of Cherokee, Osage, and guerillas searching for fugitive slaves attacked Humboldt. Stores and homes were robbed of money and valuables.

Soon afterward, Humboldt's Home Guard was formed. Its members were old men, young boys, and a few from the militia who returned to the town after the raid.

On October 14, 1861, Humboldt was raided a second time. The Home Guard, caught by surprise, could do little to fend off the raiders. Most of the town's buildings, both homes and businesses, were set on fire, though the women and children were allowed to save some valuables and household goods first.

Fearing that reinforcements were on the way from nearby Iola, Kansas, the raiders left Humboldt, releasing captives from the Home Guard as they fled.

Though the town was left in ashes and ruin, Humboldt, like other towns on both sides of the Missouri-Kansas state line in the path of guerrilla raids, survived the Civil War.

Today, you can take a self-guided tour a dozen Civil War-related sites in Humboldt. Monuments mark each site. Pick up a tour brochure at the address listed. Call for group tour information.