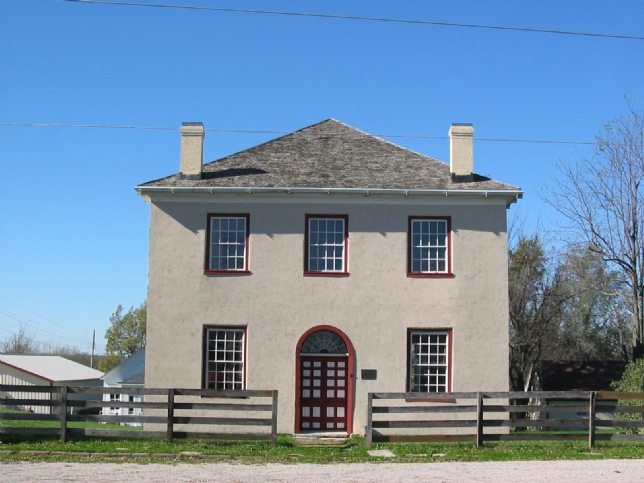 Learn about the stories of Johnson County, Missouri’s Unionists and Confederates and their lives together.

The Old Johnson County Courthouse, in Warrensburg, Missouri, was completed in 1842 and functioned as the County seat until 1871.

The Courthouse was the site of a murder of the newly elected county clerk, Marsh Foster, by the former clerk's son William McCown on February 18, 1861. This was just before the official start of the war, but was based on the political sympathies of the two men. The men of Johnson County quickly formed troops both Union and Confederate. Local lore says that the two armies, the beginning of Cockrell's Brigade (Confederate) and Emory Foster's (Union) took turns drilling on the same parade ground. By the end of the war the town square had become a Union army camp. A hotel serving as a hospital and other buildings constructed for stables and barracks.

The site boasts a statue of Old Drum, a dog famous in Warrensburg history.

Ever wonder where the old saying, “A man’s best friend is his dog,” came from? Senator George Graham Vest won a court battle and the hearts of dog lovers everywhere when he paid his famous tribute to the dog during the 1870 Burden vs. Hornsby court case in Warrensburg.

The “eulogy to the dog” won the case for Charles Burden whose favorite hound, Old Drum, was shot by a neighbor & brother-in-law, Leonidas Hornsby, who had sworn to shoot the first sheep-killing dog that came onto his land. When Old Drum wandered onto his property one night, a hired hand shot the dog.

Burden sued Hornsby for damages, and the trial quickly became one of the strangest in the history of this area of the country. After several trials at magistrate court and district court, punctuated by appeals by the loser in each trial, the case finally reached the Supreme Court of Missouri. The award of $50 in damages to Burden for the loss of his favorite hunting dog was upheld.

The many trials involved prominent attorneys on both sides. David Nation, whose wife Carrie made a name for herself in the Temperance Movement, appeared for Burden in one of the early encounters. The last jury trial, held September 23, 1870, in what is now the Johnson County Historical Society museum and is reenacted each year during the Old Drum Day Festival in May, featured the most prominent lawyers.

Vest’s closing argument in the Old Drum case, known as his “eulogy to the dog,” won the case and became a classic speech, recognized by William Safire as one of the best of the millennium. If this speech did not originate the saying, it certainly reinforced it: “A man’s best friend is his dog.”

“Gentlemen of the jury, the best friend a man has in this world may turn against him and become his enemy. His son or daughter whom he has reared with loving care may prove ungrateful. Those who are nearest and dearest to us — those whom we trust with our happiness and good name — may become traitors in their faith. The money that a man has he may lose. It flies away from him, perhaps when he needs it most. A man’s reputation may be sacrificed in a moment of ill-considered action. The people who are prone to fall on their knees to do us honor when success is with us may be the first to throw the stone of malice when failure settles its cloud upon our heads. The one absolute, unselfish friend that man can have in this selfish world — the one that never proves ungrateful or treacherous — is his dog.

Gentlemen of the jury, a man’s dog stands by him in prosperity and poverty, in health and sickness. He will sleep on the cold ground, where the wintry winds blow, and the snow drives fiercely, if only he can be near his master’s side. He will kiss the hand that has no food to offer; he will lick the wounds and sores that come in encounter with the roughness of the world. He guards the sleep of his pauper master as if he were a prince. When all other friends desert, he remains. When riches take wings and reputation falls to pieces, he is as constant in his love as the sun in its journey through the heavens.

If fortune drives the master forth an outcast in the world, friendless and homeless, the faithful dog asks no higher privilege than that of accompanying him to guard against danger, to fight against his enemies. And when the last scene of all comes, and death takes the master in its embrace, and his body is laid away in the cold ground, no matter if all other friends pursue their way, there by his graveside will the noble dog be found, his head between his paws, his eyes sad but open in alert watchfulness, faithful and true even to death.”