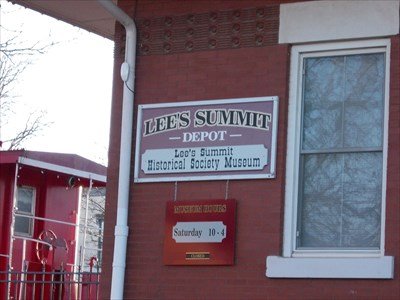 The Historical Society of Lee's Summit maintains a museum in the 1939 Post Office in downtown Lee's Summit on West Main Street.

The area now known as Lee's Summit began as a lush prairie inhabited by the Osage Indians. Tall grasses covered the area, and the only trees were located along the many streams that existed at the time.

In 1808, a treaty between the Osage Indians and the U.S. government was signed, and the Indians were eventually moved from their land to reservations.

The word spread quickly about the beauty of this area. Early settlers arrived between the years of 1830 and 1867.

The period that was perhaps the darkest in the history of Lee's Summit and the surrounding towns was the Border War which started in the mid 1850s. The Border War eventually escalated into the Civil War 1861. Most of the citizens of Big Cedar (Lee's Summit), Lone Jack, Raytown, Pleasant Hill, to name a few, were Southern Sympathizers. There were many bloody skirmishes during this time. The notorious William Quantrill and his band of guerrilla's, which included the three Younger brothers, rode the country side and reaped havoc on the Union forces.

In 1863 Quantrill burned Lawrence, Kansas, and killed many of its residents. In retaliation for this slaughter, Union General Thomas Ewing issued the infamous Orders No. Eleven. This order stated that all the residents of Jackson, Bates and other bordering counties must leave their homes and possessions within ten days or suffer the consequences. Families were forced to leave everything behind, including livestock, and above all, their homesteads. The settlers fled to friends' homes in unaffected areas; and some, who had the means, went back to their original family homes in the South.

Union troops burned and slaughtered their way through the counties listed in Orders No. 11. Many towns were totally destroyed, lives were lost, and the face of the area was changed forever. The scars of Orders No. 11 remain with us today.

The museum contains an exhibit on the Border War including Lee's Summit's notorious resident Cole Younger, maps, photographs, and artifacts of early Lee's Summit. Displays include a re-creation of the Vogue Theater, a WPA kitchen, information on local musical families the Brownings and Methenys. Much more can be found at the museum including a gift shop and research room.