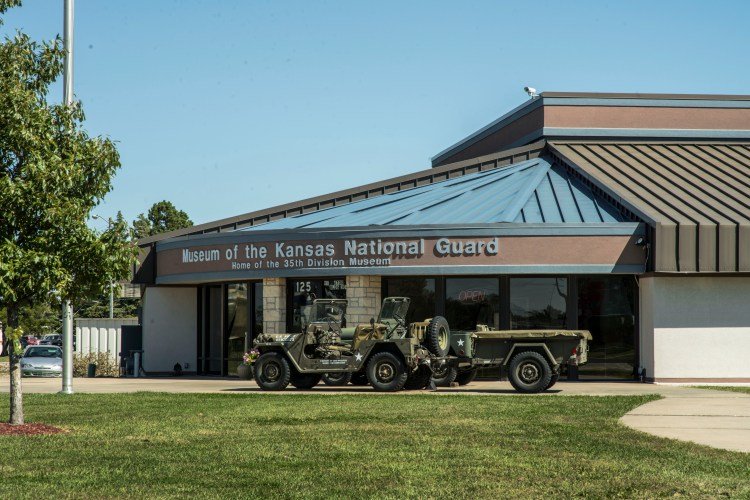 Located in Topeka, Kansas, the Museum is dedicated to preserving the heritage of the Kansas National Guard and honoring the memories of the soldiers and airmen who, for over 145 years, have served Kansas and the United States whenever the call was made.

Within the Museum walls, the weapons, uniforms and other artifacts carried or worn by Kansas Guardsmen from the Civil War to the War on Terrorism are proudly displayed. These artifacts paint a picture of the Kansas citizen-soldier from the early and bloody days of the birth of the state, to today’s Guard missions around the world.

Surrounding the Museum building, visitors can see static displays of military equipment including an M60 tank (previously-used by the Kansas Army National Guard), an 8 inch self-propelled howitzer (capable of firing Nuclear rounds), a variety of helicopters, including an OH-58 Bell Kiowa, an OH-6 Loach from the Silver Eagles (the U.S.Army’s answer to the U.S. Air Force Thunderbirds), an AH-1 Cobra, the powerful CH-54 Skycrane, and various other equipment.

Throughout the year, occasional outdoor events are held in the area behind the Museum, including Civil War reenactments, youth events, and Kansas National Guard reunions.

Share in the rich history of Kansas and her volunteers who, for over a century and a half, have done their best to bring freedom to people across the world. Visit the Museum of the Kansas National Guard which serves as our guardian, tasked with the never-ending mission of remembering and honoring our soldiers and airmen, who have given, and will continue to give, their time and lives for causes greater than themselves.