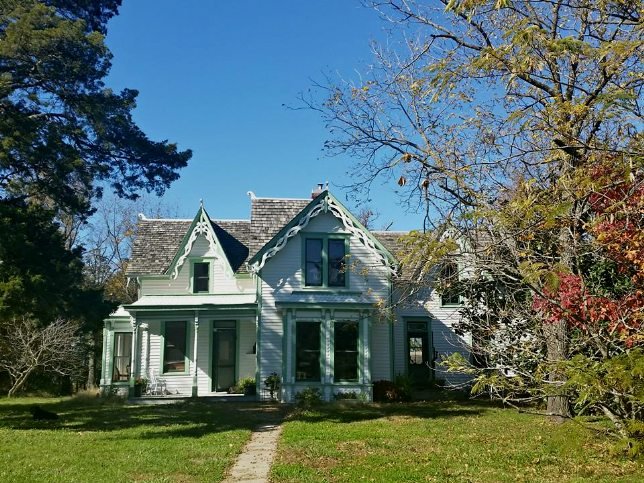 Poplar Heights Farm is a living history farm and nature conservancy in Bates County, at Butler, Missouri. The farm supports and conducts programs to preserve the area’s past and offer educational opportunities to the region.

The family house, barns and extensive landscaping have been restored to their 1890s look. Poplar heights Farm is now open to the public with programs, displays, demonstrations, a computerized research library for the history of Bates County and the Main House is a museum of period antiques showcasing life in rural Missouri at the turn of the 20th century. The farm fields are also being developed to promote native Missouri plants and wildlife and will include a series of walking trails.

The primary barn, a peg and beam threshing barn, was built around 1874. It has been restored and is now used for programs, displays, and demonstrations.

The broom corn barn, over 100 years old, has been restored. The west section now houses the Seelinger Broom Works, bringing visitors fine brooms crafted from broom grown on the farm and crafted on original antique machines.

The farm fields are being developed to promote native Missouri plants and wildlife and will include a series of walking trails.

In 1856, when land could first be actually titled in Bates County, Missouri, Anthony S. Walker, from Cooper County, Missouri was the first to buy the land that would become Poplar Heights Farm.

Anthony Walker died during the Civil War and the property passed to his son, John Read Walker. John Walker left Yale University and moved to Summit Township in Bates County where he built the main house, the threshing barn and smoke house and began farming.

After a single term as state representative from Bates County, John Walker left and sold the farm to his brother-in-law, John L. Hickman. Hickman began an orchard, but he too, soon left. On October 17, 1884, Hickman finalized the sale of the farm to Adam Seelinger.

Adam Seelinger was born in Lampertheim, Germany on May 5, 1830. He was the son of Jacob and Eva Wegerle Seelinger. His parents never came to America. At the age of 22 he left Germany for America. A year later he married Franciska Marer, also a German immigrant. She was the daughter of Johann Adam and Maria Apolinia Zimmerman Maurer of Ramsen, Germany.

After the Civil War, the family moved to Bates County, Missouri and settled on a farm near Prairie City. Here they raised six sons, acquired thousands of acres of rich farmland and lived to see their grandchildren and great grandchildren prosper. Grateful to his adopted country for the many blessings he acquired here, Adam instilled in his family the idea of community service and care of the land that brought them their living.

Poplar Heights Farm has also opened a Family History Center at its offices in nearby Butler, Missouri at 208 North Osage. The center offers genealogy records, plat books, cemetery records, historic photos and maps, and a wealth of other material to assist in researching and understanding early life in the region. Poplar Heights Farm is pleased to be able to support research into the history of the region.