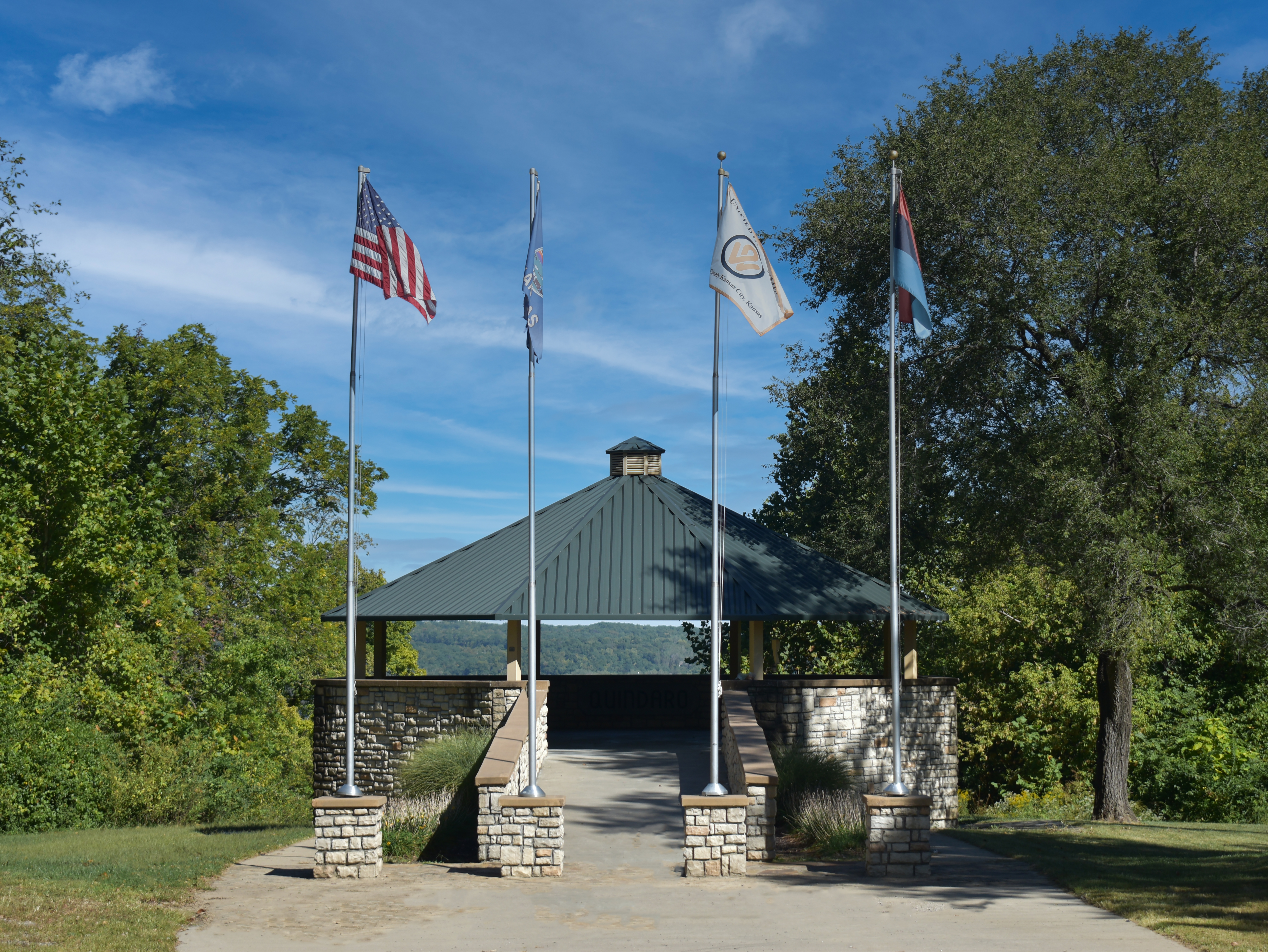 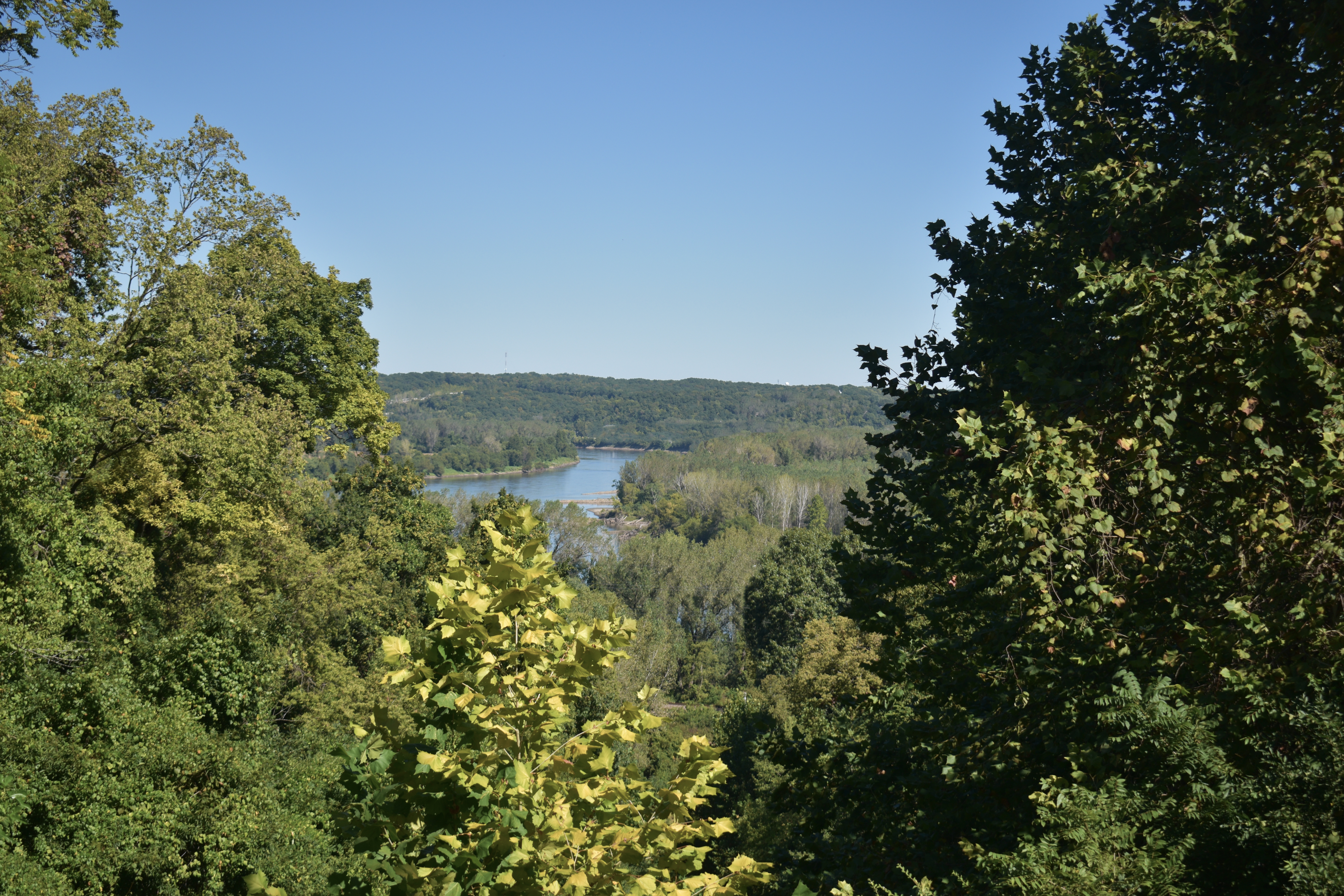 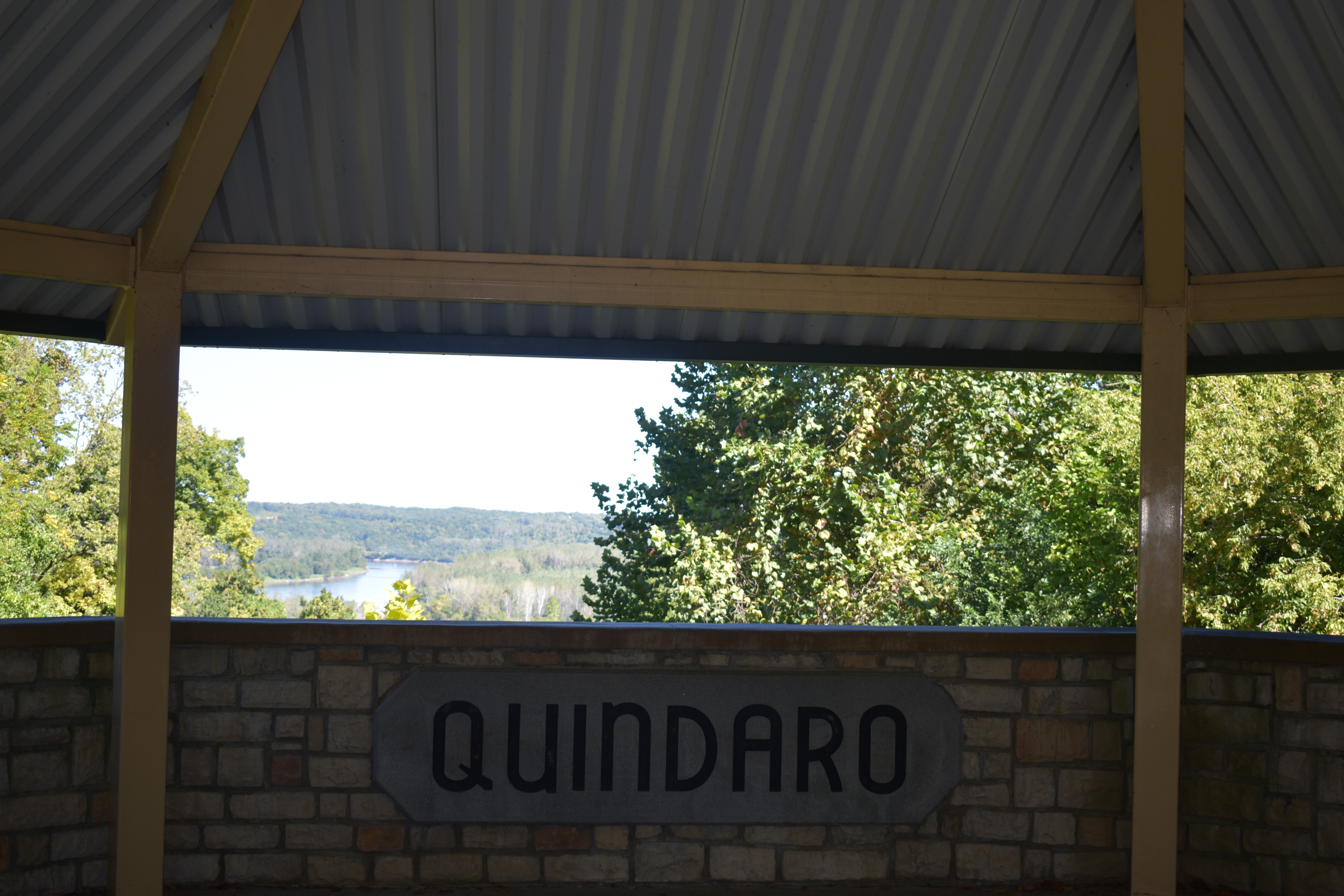 Early travel through Kansas Territory was facilitated by the identification of particular towns and sites referred to as stations on the border of Oklahoma and Missouri, into Nebraska and Iowa. Locations along waterways such as, the Missouri River were known as “Freedom Crossings,” including the crossing at the bend between Parkville, Missouri and Quindaro, Kansas. (25)

It is estimated that approximately 300 slaves moved in the four years 1855 - 1859 through the antislavery town, Lawrence, Kansas that was founded in the year of 1854 by the New England Emigrant Aid Society with an antislavery mission. That number could be higher, due in part, to the secrecy of the Underground Railroad. Lawrence, Kansas was named after Boston philanthropist and antislavery reformer Amos Lawrence (Civil War on the Western Border: The Missouri-Kansas Conflict,1855-1865, KSHistory.org). This particular data equates to about 75 slaves per year, even though the nearby Douglas County was known as pro-slavery. Despite Lawrence, KS being attacked by Douglas County, and by pro slavery forces from Missouri, Lawrence, Kansas managed to sustain the antislavery cause. It seems most passages are attributed to the station referred to as Fort Bain. Fort Bain, was a fortified log house capable of housing 50 people, served as a base of operations for radical abolitionists John Brown, James Montgomery, and its namesake, Captain Oliver P. Bain. With its location close to the Missouri border, Brown and Montgomery could stage raids into that state to liberate slaves and usher them to freedom on the Underground Railroad. The building served as a defensive position against proslavery forces during the "Bleeding Kansas" troubles, and Brown once claimed to have used it to defend against a force of 500 attackers. (26)

The proximity in time of the founding, development, and active period of the existence of the town of Quindaro is very interesting given the connection between the history of the removal and scattering of the Wyandot people; and the multicultural gathering and collaboration at this site (27). The Wyandot population that relocated from Ohio to Kansas in 1843 was substantially less than 10,000; and estimated to be approximately 700. By 1750, the total European white population had grown to roughly one million in the thirteen colonies and subsequently exploded to 12.5 million Euro-American and 1.75 million African Slaves. In very different ways, both the Wyandot and African slaves found a parcel of land on the Kansas side of the Missouri River to be of nearly sacred significance (27)

Since many cultures and nationalities settled throughout the Kansas and Missouri ‘diaspora’ (meaning a scattering), building a sustainable community, and economy at the present day “Quindaro Township Ruins Commemorative Site” wasn’t an easy endeavor. It took many cultures and nationalities to build a healthy, thriving community. Throughout history an array of cultures have been scattered through involuntary dispersions, and through voluntary dispersions, such as the expulsion of Jews from Egypt, the trans-Atlantic slave trade, the Chinese of Hindus from South Asia during the “coolie’ trade, the Irish immigration resulting from the potato famine, and on through the present day forced scattering of people from original homelands in the Middle East (28)

“Boosterism” began to effect and form the development of the American western frontier in the late 1830s and became rampant as a form of speculative investment between 1830 and 1850. In this economic environment, the town of Quindaro was envisioned, platted, and developed. The date of December 1856 is given as the platting, with groundbreaking in January 1857. By May 1857, a description in the new local newspaper of the construction from the article by Alan Farley “Annals of Quindaro: A Kansas Ghost Town”, copyright 1956, reads, “trees had been removed from several acres of the town site that grading of the hill to the wharf… had progressed so that heavy loads might be hauled… leading into the territory without difficulty. Thirty to forty houses had been built and occupied. A schoolhouse had been opened on May 3, and 16 business houses were in the process of erection. The Quindaro House, the second largest hotel in the territory was opened; the town was well supplied with two hotels, two commission houses, a sawmill of 5,000 feet per day capacity, a stone yard, a carpenter shop, land agencies, surveyor builders, cabinetmakers, and blacksmiths. By August, the first brick house was under construction on P street, the bricks having been burned on the town site. (29)

In 1860, the severe drought and famine in Kansas that began in 1859 and lasted almost two years, was reported by Eastern Newspapers. Between the mid and late nineteenth century, three severe droughts struck North America, and each had its own effect on the social, ecological, and environmental state of the plains and the west. The drought of the mid 1859’s to the ice 1869’s, or Civil War Drought, added to the near extinction of the American Bison. (31).

From a different perspective, and lens, some critics had different views on why the Quindaro Township became a “Ghost Town”. Some mentioned, “This is the kind of explosive growth that the speculative capital of the Eastern United States non-resident investors created. That kind of growth can be found in real estate speculation, even today. As with any speculation, there is risk, and with economic fluctuation, some investments collapse. In 1862, only five years from the groundbreaking, the Kansas legislature repealed the act that incorporated Quindaro and put the town company out of business.” (32)

Today, the Quindaro Ruins National Commemorative Site is located on the bluffs of the right bank of the Missouri River, on the present-day northern edge of Kansas City, Kansas, just west of the point at which the river is crossed by Interstate 635 Highway. The location is approximately five miles upstream from the confluence of the Kansas and Missouri Rivers and two miles south of Parksville, Missouri. The principal boundaries of the site are North 31st Street on the west, Sewell Avenue on the south, Interstate 635 Highway on the east, and the Missouri Pacific Railroad right-of-way on the north. (34) The commercial district of the Quindaro township was located along Kansas Avenue, the principal North-South Street extending south from the wharf up the bluff slope. This corresponds to the juncture of Sections 29 and 30, as well as the present North 27th Street in Kansas City, Kansas. Two principal commercial streets, Levee and Main, bisected Kansas Avenue along a west-northwesterly to east-southeasterly axis, running parallel to the right bank of the Missouri River as it was then located. Streets numbered first to Tent extend east-west, perpendicular to Kansas Avenue and south of Main Street on the original plat. Lettered north-south streets (A-Y) extended from Tent Street north to Main, with Kansas Avenue in place of Q Street. It should be noted that when the plot of Quindaro was laid out on the ground, an apparent error of one rod in the east-west direction was made. Consequently, all known remains within the town-site are located approximately 16.5 feet to the east of whereby legal description they might by expected to be found. (35)

Local Social historian, Mr. Luther Smith, who was born in Quindaro, mentioned there used to be a streetcar that drove all the way from 27th & Farrow to Minnesota Ave, to the James Street bridge, into Kansas City, Missouri, to Main St., and to Swope Parkway. Smith used to ride the streetcar throughout the city. In addition to riding the streetcar, Smith noted there used to be a big water tank on 29th and Sewell.

It is documented that the world-renowned historian, Dr. John Hope Franklin visited the Quindaro Ruins site. Quindaro town-site was named for Nancy Quindaro Brown, a Wyandot woman who married former Ohio land agent, Abelard Guthrie. The purchase of a portion of this parcel of land from Wyandot tribesmen was expedited by the fact that Guthrie’s wife was a Wyandot. Her name, “Quindaro,” became the name of the township. Quindaro can be translated as “a bundle of sticks.” (36)

However, John M. Walden, Free State editor of the Quindaro Chindowan newspaper, simplified its meaning to, “in union there is strength” (37).

In summary, the plan for a new town was mentioned by developers in the town of Lawrence, Kansas to provide a free-state abolitionist landing on the Kansas side of the Missouri River. The land was obtained by establishing a partnership between Abolitionist Wyandot and The New England Emigrant Aid Company; and to mention again, the town quickly flourished as a natural port for Free Soil advocates. (38). Since the world economy was interconnected, the worldwide economic financial crisis that began in late 1857, would affect the development of the worldwide economy, and it would eventually affect the United States economy. The United States Financial Panic of 1857 was caused by the declining international economy and over-expansion of the domestic economy.

Historians, community leaders, social historians, archeologists, and diverse leaders have documented why the Quindaro township declined. In truth, I would argue, that some of the major causes to the decline of Quindaro township were mainly due in part, to legalized slavery that was still in effect throughout the United States of America, legalized racism, several global economic recessions, and the opium addiction crisis before the American Civil War, during the American Civil War, and the opium addiction crisis that effected the mental health of soldiers and diverse citizens in both urban and rural communities. Equally important, systematic economic disenfranchisement hindered the economic growth of the Quindaro township. At the same time, many White Americans did not recognize blacks, Native Americans, and indigenous cultures as citizens of America.

With that being said, if a particular culture is denied the right to vote based on the color of their skin, then the dominant group with economic leverage, is able to control the economic resources, make important political decisions, and create laws that effects the less fortunate in terms of having access to quality education, jobs, health care, healthy foods, and sustainable communities where all people can live in freedom. As I mentioned previously, I believe that various factors contributed to the demise of the Quindaro Township. Despite the various factors that hindered the economic growth of the Quindaro Township, the community managed to survive. Equally important, caring community leaders, and concerned citizens managed to preserve several historic sites, and Underground Railroad freedom passageways throughout the community. Today, diverse leaders throughout Kansas, the United States of America, and throughout the world continue to envision innovative ways to sustain the Quindaro Township for future generations.