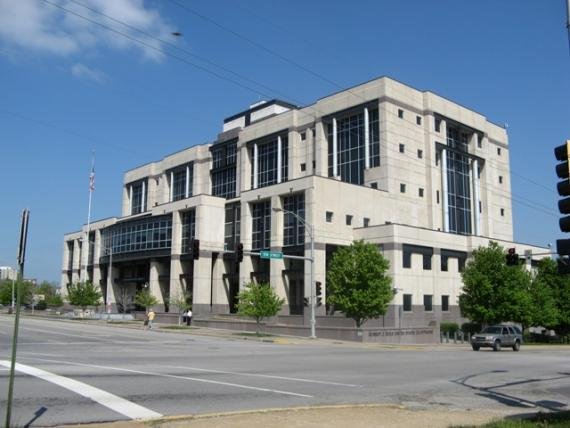 The Robert J. Dole Federal Courthouse in Kansas City, Kansas, where thousands of new Americans have taken their naturalization oaths, is also home to a comprehensive exhibit on immigrants in Kansas.

Named for retired U.S. Senator Robert J. Dole, the U.S. Courthouse is a granite-clad, six-story steel building above grade with a ground floor and mezzanine below grade, plus a penthouse at the roof. The building is home to U.S. District Courts and related agencies, as well as offices for the Department of Defense Inspector General. Originally designed as a federal courthouse, it was completed in 1994. It is located in the Central Business District of Kansas City, Kansas, on a 4.76-acre sloped site.

On the sixth floor of the Dole Courthouse, just down the hall from where large naturalization ceremonies take place several times a year, is "Americans By Choice." This exhibit shows why and how immigrants qualify to become naturalized U.S. citizens. In the years following the Civil War, Kansas had the highest rate of immigration in the nation, much of it from abroad.

Photographs, documents, maps, and a video produced with recently-arrived area immigrants bring the subject to life. There's even a sample citizenship exam you can take.

Visitors must have a valid ID and register at the security office prior to entry.