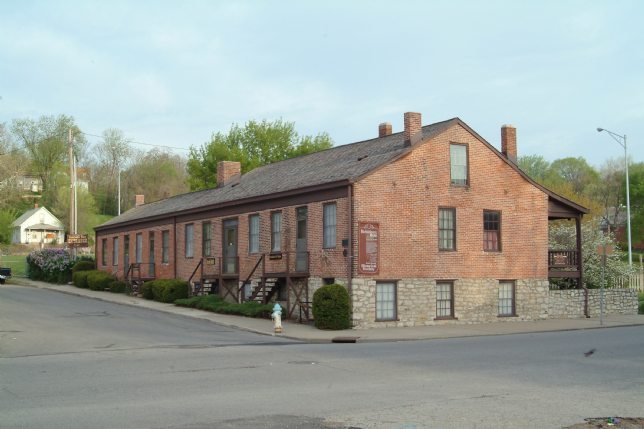 It is believed that the structure referred to as Robidoux Row was constructed during the 1840s and 1850s. Built in three sections, the building is constructed of bricks supported on a native limestone foundation.

Many history books refer to Robidoux Row as the “oldest or first apartment house west of the Mississippi”. We are not sure is this is correct or not, but it was an early adventure in apartment building. Architects during the restoration believe that originally the Row was a series of one-room apartments back to back.

Originally the apartments were built to house families who were of “the right quality” and who had purchased lots from city founder Joseph Robidoux. He would let the families stay at the Row rent free while their houses were being built near the downtown area. Later, persons who were traveling west often stayed here at Robidoux Row while waiting for their wagons to be ferried across the river or during the long hard winters. Robidoux Row could be thought of as “St. Joseph’s first motel”.

Covered wagons were backed up to the door and the family’s possessions were carried into the room that served as kitchen, dining room, living room, and bedroom. During summer, much of the cooking could have been done outside over campfires. The building's one fireplace could possibly have been used as a communal kitchen during cold weather.

Heat in the apartments was furnished by iron stoves, which were becoming popular around that time. These stoves could have been used for heating and cooking. Every room has a chimney to which a stove could be connected. Light would have been furnished by candles or bowls of fat or lard with a wick. Kerosene lamps were not available until after the Civil War.

In 1857, Joseph Robidoux moved to the east apartment of Robidoux Row after his wife, Angelique died. He spent the last eleven years of his life here. His sister, Pelagie, helped to care for him. Robidoux died in this apartment on May 27, 1868 at the age of 85, blind and broke.

For many years, the building continued to be used as apartments. Over the years many of the rooms were joined together by doors cut into the walls making two, three and four room apartments. As the years took their toll and the city moved eastward, the building known to many as Robidoux Row became very dilapidated. The building was condemned and was about to be torn down for highway construction when the late Mary (Stauber) Boder and the Saint Joseph Historical Society undertook the project in 1974 to save the last remaining structure built by Joseph Robidoux.

The building was in such bad shape that the floor in only one room could be preserved. The entire interior was gutted and rebuilt. Even parts of the outside walls were so dangerous that they had to be torn down and rebuilt. The eastern section was restored as museum rooms showing how the rooms would have been furnished in the 1840-50 period. The middle section (now the western section) was restored as rooms to be used by the Saint Joseph Historical Society. These rooms display history of fur trading, Robidoux history, and early history of Saint Joseph. The original western section was torn down in the 1932 after a fire.

Archaeological diggings in 1974-76 uncovered the original floor of the northern gallery (porch). These diggings also revealed the location of a well, seven to nine privies and a large barn across the back lot. A stone watering-trough was located near the present day east entrance to the garden.

Restoration of the building started in earnest in 1975. The garden was laid out in 1980. The official opening of Robidoux Row took place on May 9-10, 1981, before the restoration was completed. During the opening ceremonies, a time capsule filled with many items and notes from school children was buried in the area of the present day well. By the fall of 1981, the reconstruction of Robidoux Row was completed as a new gallery was constructed on the north side of the building.