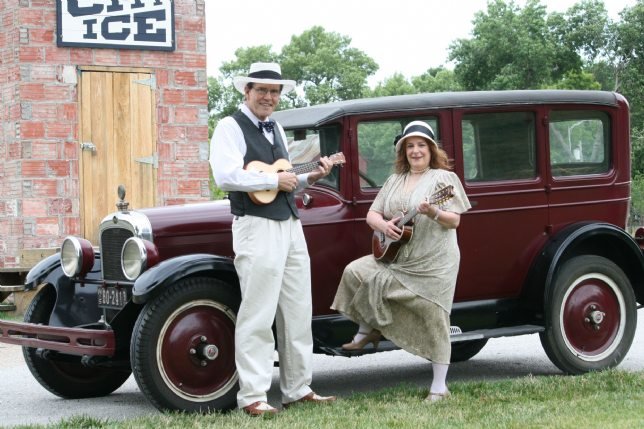 History comes alive in the many town buildings which have been recreated in the “Shawnee Town Square” of Shawnee, Kansas, in the 1920s.

Shawnee Town 1929 has recreated a late 1920s truck farm which is a composite of truck farms in the Shawnee area. Rather than a restoration or re‐creation of any one particular residence, it utilizes an assemblage of representative truck garden farmstead buildings on a portion of the museum grounds. It is comprised of a relocated house that was built by Joseph Scudder Hart and his wife, Wilhannah in 1877 on their 106 2/3 acre farm near today’s 75th Street and Quivira Road. Belgian immigrants Victor and Erma DeCaeny bought the house and property in 1926. The house is furnished based on oral histories from descendants of the DeCaenys and typical house furnishings of 1929 Johnson County.

The area now comprising Shawnee, Kansas is rich with history and examples of characteristic American Midwestern life. Its heritage reaches back into the prehistoric era of the Osage native people and before. Its immediate origin springs from its location as the political and religious center of the Shawnee Indians.

It enjoyed a location on both the Ft. Leavenworth-Ft. Scott Military Road that tied it into the government-organized transportation routes that connected installations before and after the Civil War. During the 1840s and ‘50s branches of the Oregon, California and even Santa Fe Trails wound through part of its current eastern area. During the Civil War, unrest came to Shawnee in the person of William Quantrill and his Missouri bushwhackers. Some Shawnee men served with Union forces at the Battle of Westport.

From its brief stint as county seat of Johnson County [under the name “Gum Springs”] to its location close to the Campbellton stop on the Kansas City, Ft. Scott & Gulf Railroad, Shawnee evolved into an agricultural service town of importance second only to Olathe in the late 19th century. In fact, by the 1920s, Shawnee’s truck farmers had helped the town gain a reputation as one of the leading fruit and vegetable producers for the entire region. Successful farming helped Shawnee’s farmers weather the Great Depression more successfully than those in many other parts of the country.

Spurred by the Hocker Interurban Line and Kansas State Highway 10 before World War II, Shawnee emerged in the last half of the 20th century as a comfortable multi-faceted growth suburb that has continued to provide good places to live and wonderful organizations to stimulate community life and involvement. In Shawnee, as well as in other parts of Johnson County, Belgian and other foreign-born farmers mixed easily with native-born merchants and agriculturalists to help create a varied ethnic history. A small African American community long enlivened the community with its own church and school as well.

Part of a rural high school district since the early 1920s and featuring both public and private school opportunities over much of its history, education has been a major feature of life in and near Shawnee for well over a century. Churches and social institutions including the Grange, Masonic and Odd Fellows lodges and their auxiliaries joined the citizens together to accomplish goals that individually might prove impossible to achieve. The volunteer fire department began to serve the safety and organizational needs of the community after the mid-1920s.

While Shawnee developed its own suburbs in the form of Monrovia and Zarah at certain points in time, by the 1950s it became clear that its future lay as a suburb in the larger Kansas City metropolitan region. It had never been just a bedroom for any city or region, and the new general suburban status did not thrust that passive role on Shawnee either. It has sought always to provide its citizens with as full a range of activities and opportunities as its tax base and population might allow and encourage. In other words, it has always sought to be a self-contained community while clearly also relating to larger issues in the county, the region and the state as a whole.