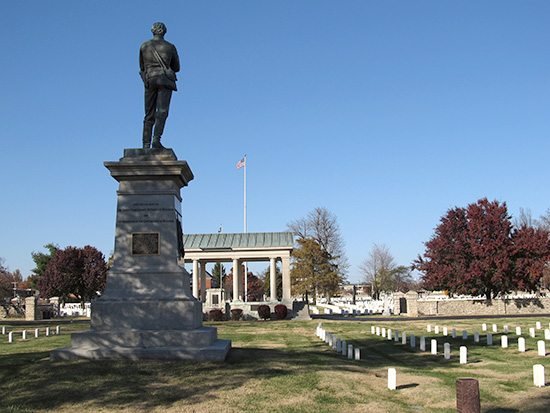 Union and Confederate troops are buried here ... but they're not buried together.

A wall separates the Union and Confederate portions of this early national cemetery, located not far from Wilson's Creek National Battlefield. The two operated as separate graveyards until 1984.

Settlers began arriving in southwest Missouri in 1822, making their way north up the James River and its tributaries. But it was only after removal of the Kickapoo and Delaware Indians in 1830 that permanent settlement became possible. John Polk Campbell is credited as the founder of Springfield. He arrived with his brother Madison in 1829, and upon finding a viable water supply carved his initials on an ash tree to establish his claim. Other settlers arrived almost daily and it was not long before a settlement developed, complete with stores, mills, a school and post office. By 1838 the town had been officially incorporated.

In 1861, Springfield was the site of the Missouri State Convention to determine its future as part of the Union. The governor favored secession. Delegates urged approval of the Crittendon Resolutions (then before Congress), which would have legalized slavery where it already existed, and would let new states decide their own rights and would reimburse slave owners for losses caused by abolitionist raids. Delegates ultimately decided against secession and opposed any military action by either side; but if the federal government declared war on the South, they would join the Confederate ranks.

The Battle of Wilson's Creek, the first major Civil War engagement west of the Mississippi River, was fought in Springfield on Aug. 10, 1861, and involved about 5,400 Union troops and 12,000 Confederates. Although the battle was a Confederate victory, the South failed to capitalize on its success; it led to greater federal military activity in Missouri and set the stage for the Battle of Pea Ridge in March 1862.

Many men who died at the Battle of Wilson Creek would eventually be buried at Springfield National Cemetery, established in 1867 when the city purchased five acres for a burial plot. In 1911, the Confederate Cemetery Association (CCA) donated six acres, two of which were enclosed by a stone wall. Along with the land came the provision that burials would be restricted to men who died serving the Confederacy. Through a series of amendments to this provision in 1948, 1957 and 1984, all eligible veterans are now permitted in this portion of the cemetery. An 1871 cemetery inspection report recorded 832 known and 689 unknown interments in the cemetery. It continued, “A very worthless superintendent was in charge last year, and the cemetery was sadly neglected. This year it has been put in good order.”

Springfield National Cemetery was listed on the National Register of Historic Places in 1999.