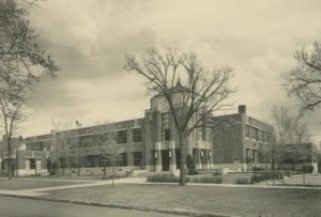 Sumner Elementary School, the then all-white school in Topeka, Kansas, that refused Linda Brown from attending, led to the Brown vs. Board of Education lawsuit and the desegregation of all schools.

The Sumner Elementary School is a National Historic Landmark listed with the United States Department of the Interior. It was constructed in 1936 as a part of the Federal Emergency Administration of Public Works, a New Deal program. The school was designed in the Art Deco style by Thomas W. Williamson and has an unusual amount of stone detailing. Because of the quality of the original construction, it retains many of its unique features, including light and bathroom fixtures, clocks, carved woodwork and a marble-trimmed fireplace in the kindergarten.

Monroe Elementary School, the segregated school that Linda Brown had been attending, closed in 1975 and was held privately for a number of years before being purchased in 1991 by The Trust for Public Land and added to Sumner's listing on the National Register. Because Sumner was still in use at the time for classes and Monroe was not, Monroe was selected on October 26, 1992, to house the Brown v. Board of Education National Historic Site, the official commemorative location operated for the public by the National Park Service.

Sumner Elementary School closed in 1996. It was one of eight schools closed as part of a local desegregation plan to satisfy the original Brown case which was re-opened in the 1980s and not closed until 1999. The building was initially purchased by the Topeka & Shawnee County Public Library, which used it as a storage facility. The City of Topeka purchased the building from the library in 2002, hoping to rehabilitate it, but the city was unable to allocate the necessary funds. The city then tried to sell the property, but found no buyers; it even considered demolishing the building, which had fallen into serious neglect and had suffered vandalism. As a consequence, in May 2008, The National Trust for Historic Preservation listed the building on their list of America's Most Endangered Places.

The city chose to auction the building to the public in January 2009. Hearing of the sale and recognizing the significance to the Civil Rights movement, Rev. W. R. Portee, minister of a nondenominational Christian church based in Los Angeles, purchased the building using the umbrella organization True Foundation World Outreach Ministries in April 2009 for $89,000. The organization planned to renovate the building and open it to the public as a community center and human rights memorial. The estimated renovation costs are $7 million.

The Brown vs Board Sumner Legacy Trust consists of Topeka citizens and activists attempting to save the Sumner site, and bring it back to life in the spirit of its legacy. The group describes itself as "...activists in the preservation and interpretation of Sumner Elementary of Topeka, KS, a National Historic Site, and promotion of the values of democracy, freedom, and equality."

This site is not yet open to the public.