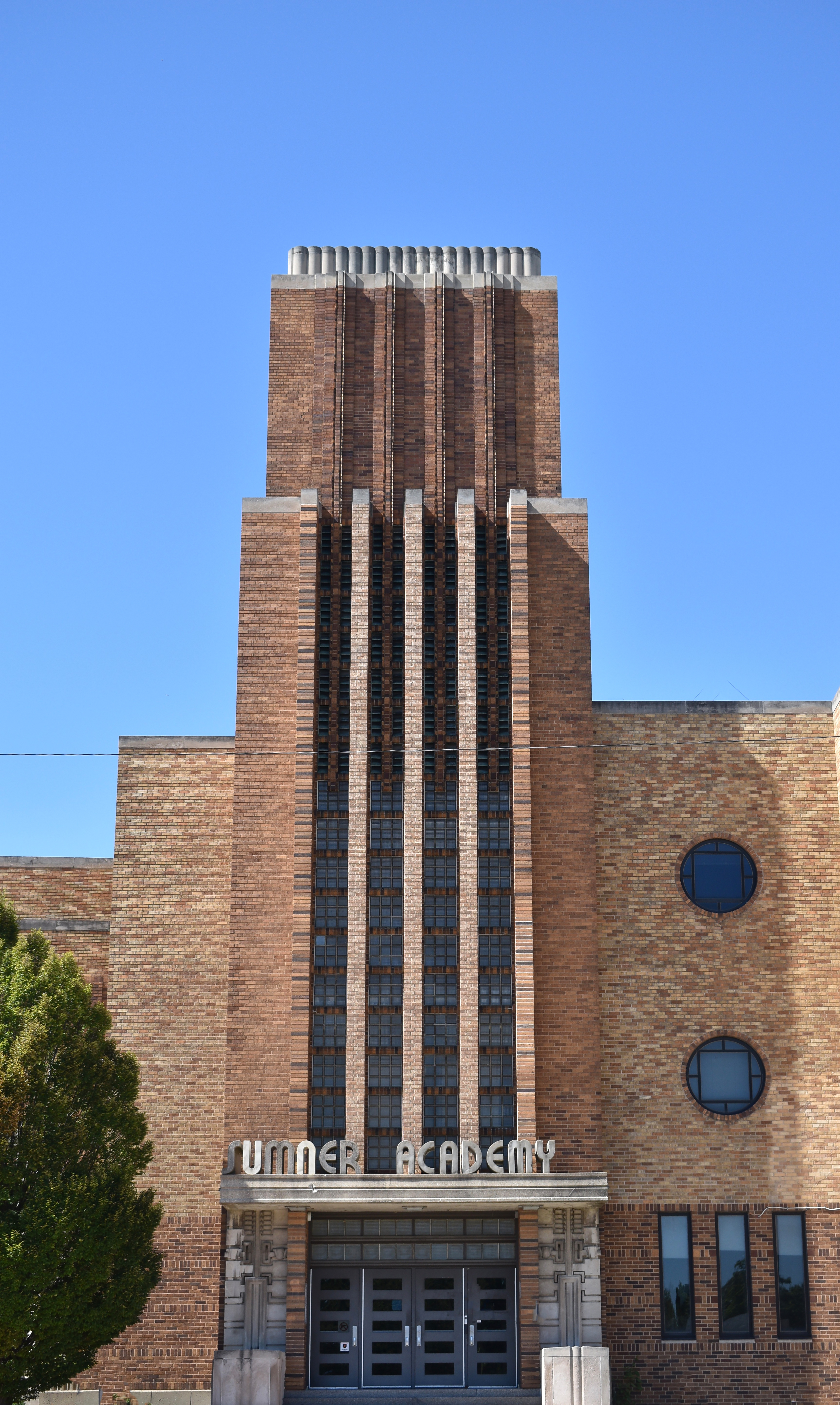 In 1905, Sumner High School opened as a result of an incident that occurred in April 1904. Because of the hostility at the school the following day, school was canceled for the balance of that school year. When the school opened in September of 1904, a split schedule was implemented: During the day the school operated as the Kansas City, Kansas High School.  This name was selected by the Board of Education but was highly protested by the Balck community. A meeting was held and the name was changed to Sumner High School, in honor of abolitionist, and U.S. Senator Charles Sumner from Massachusetts.

At the January 1905 state legislative session, House Bill No. 890, also known as the “Segregations Bill,” was passed. This bill was specifically designed to govern the high schools of Kansa City, Kansas, and to amend section 6290 of the General Statutes of 1901. It reversed the provision for mixed high schools in the State of Kansas.

Sumner High School became the only all African American High School in the State of Kansas. J.E. Patterson was appointed as its first principal. The first location was 9th street and Washington Blvd. In 1940, the school moved into a new building at 8th Street and Oakland Avenue. The Sumner Division of Kansas City, Kansas Junior College was housed in Sumner High School from 1923 until 1951 because African Americans were not allowed to attend school at the main campus. John A. Hodge was appointed Assistant Dean of the Junior College until the two divisions integrated in 1951. The faculty at Sumner High School was carefully selected and were of the highest caliber. The faculty Roster of 1926 - 1927 indicated that forty-one percent held master’s degrees, and by 1935, sixty-one percent of the faculty held master’s degrees (42).

Sumner High School became known for its academic achievements, and for graduating several Phi Beta Kappas. The distinctive honors hailed from: The University of Kansas (7) University of Chicago, Vassar University, and Wellesley College. Because of the academic achievements of many of its graduates, Sumner High School became known as “A Citadel of Learning” and the Harvard of the Midwest." (43).

Leon Brady led a group of students from Sumner High School to Paris, France. In May 1972, The Sumner High School Jazz Band was invited to participate in the International Jazz Festival in Paris, France from July 4th - 5th, in the year of 1972. Twenty five thousand dollars was necessary to cover the expenses for this event. The Northeast community raised approximately eighty percent of this amount. U.S. Senator Robert Dole was very helpful in this venture. The Sumner High School Jazz Band was one of only seven bands invited from the United States and the only one from the Midwest.

Leon Brady was a world-class Band Director at Northeast Junior High School & Sumner High School. Many of his students would later go on to accomplish amazing things around the world. Mr. Brady was known for being a caring, but firm educator who believed in all of the students under his care. Brady took the first jazz band from the state of Kansas to Perform in Paris, France. The band from Sumner High School included a list of amazing musicians such as Freddie Allen, Felicia Smith, Jeffery Lewis, Michael Gregory, Orlando Bryant, John Washington Mark Stafford, Cragye Lindesay (Recording engineer/Multi-instrumentalist/producer), John Weatherspoon, David Bailey, Ronald Henderson, Steven Duncan, Charles Williams, Eva Cage, Reginald Watkins, (Elderstatemen of Jazz Organist & Pianist) Roger Bettis, Richard Wilson, Don Davis, Harold Dwight and Russell Hornsby. The band took first place at the jazz festival, and recorded a record while in Paris, France.

Fernando Gaitan - 1966 graduate. Became the Chief Judge for the Western District of Missouri.

Gaitan was listed by Lawdragon, a national legal magazine, as one of the 500 leading judges in America.

John McLendon ; 1932 graduate. McLendon was a member of the basketball team, the only team. His coach was Beltrome Orme, and the team had a 17-0 record that year. He was the first African American to receive a Bachelor of Science degree in physical education from the University of Kansas. While at KU, he was the advisee to Dr. James Naismith, the inventor of basketball. He received a Master of Arts in Physical Education from the University of Iowa in 1937. He coached at North Carolina College for Negroes, 1937-1952, Hampton Institute, 1952-1954, Tennessee A&I, State University 1954 - 1959, Kentucky State University, 1959 - 1963, and Cleveland State University, 1966 - 1969. As head coach at colleges and universities, his lifetime record is .760 percent (523 victories and 162 losses). His far-reaching list of firsts include being the first coach to win three consecutive national titles, (Tennessee A&I University (1957 - 1959), the first black coach of an integrated professional team, the American Basketball League (ABL) Cleveland Pipers, the first black head coach at a predominantly White College (Cleveland State), the first Black Coach in the American Basketball Association (ABA) Denver Rockets, the first black on the Olympic Staff. These are only a few of his accomplishments.

Garland Smith was born on November 26, 1935, in Kansas City, Kansas. He got his artistic start drawing pencil sketches at the Plaza Art Fairs while still in high school. He attended Sumner High School and graduated in 1954. Mr. Smith was a true activist serving on the Bonner Springs School Board for ten years as well as the Kansas Legal Aid Board. He had an entrepreneur's spirit, he opened his own business titled, “Garland Smith Interior Decoration Company.” (45)