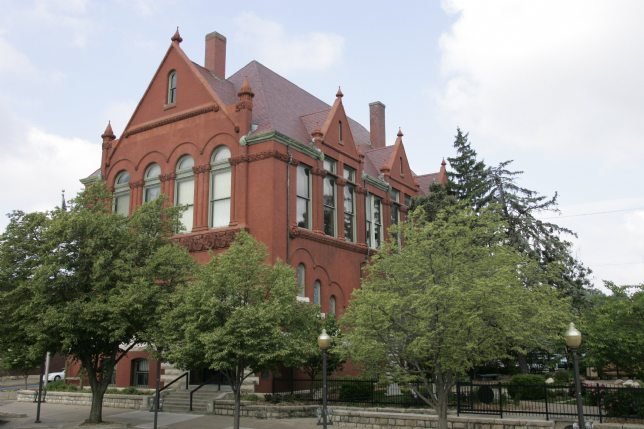 Discover stories of the settlement of Lawrence, Kansas, and the development of Douglas County in an 1888 building that housed the headquarters of a successful land mortgage and banking business that helped finance settlement of the west.

The Museum hosts exhibits and programs exploring the cultural heritage of Douglas County from its settlement in the "Bleeding Kansas" period through the Civil War, reconstruction, westward expansion, and Civil Rights eras.

The Watkins Museum of History is housed in a building commissioned by Lawrence financier Jabez Bunting ("J.B.") Watkins. The future Land Mortgage Company and Watkins National Bank was constructed between 1885 and 1888.

A classic example of the Richardsonian Romanesque influence on Kansas’s architecture, it was considered one of the most magnificent buildings west of the Mississippi River at the time of its construction.

The third floor of the building served as the home office of the J.B. Watkins Land Mortgage Company, which solicited funds from the east to lend to farmers in the Midwest. The Company, one of the largest of its kind, had branch offices in London, New York City, Dallas and Lake Charles, Louisiana.

In 1888 the Watkins National Bank was established on the ground floor of the building. The original cost of the building was $100,000; however, replacement cost today would be over $20,000,000.

J. B.’s wife, Elizabeth Miller Watkins, donated the building to the city in 1929, and it was used as City Hall until 1970. After restoration, it became the home of the Elizabeth M. Watkins Museum in April 1975. Approximately five years ago the name was changed to the Watkins Museum of History to clarify the Museum’s focus.

As you tour the building notice the architectural details. Doors have brass dressing plates, keyhole covers and ornamental hinges. Floors, walls, and ceilings have intricate finishings. There are three stained-glass windows may have been salvaged from the former Methodist church (owned by J. B. Watkins) that was located on the southwest corner of 10th and Massachusetts streets.

Some exhibits change on a regular basis, but you will always find information about the August 21, 1863 Quantrill's Raid that left nearly all of Lawrence burned to ashes, and more than 180 men and boys dead. Other exhibits and displays include an antique car on an upper level of the museum, and a life-size, furnished Victorian playhouse that children can enter.