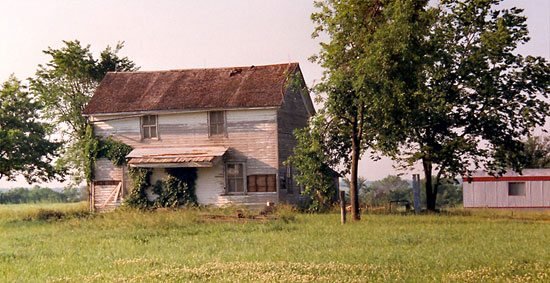 The Bailey House was built in 1870 by Wells P. Bailey, and originally set 1-1/2 miles east of Lyndon. After a grass fire accidentally burned off some of its clapboard siding in 1997, it was discovered that the house was made of logs. The house was soon acquired by the Historic Preservation Partnership of Lyndon. Since money was not available to purchase the land, (which was for sale) owners donated the house and funds were raised to move it to the Lyndon City Park. The Bailey House was placed on the Register of Kansas Historic Places in 2010 and has undergone significant restoration.  Wells P. Bailey, a millwright and a native of New York, migrated with his family to Osage County in 1870. Around that time, much of Osage County was part of a Sac & Fox Indian Reserve. An 1860 treaty between Congress and the Sac & Fox called for construction of houses for tribal families living in the Reserve. Bailey preempted a 160-acre claim on a site that had been occupied by a Fox village prior to the Indian removal, and it is known that at least a few government-built houses existed there.   Bailey’s deed implies that he purchased his land for $240, along with “$54 in full appraised value of Indian improvements on said land.” It was originally thought that the Wells P. Bailey House might have been one of the government-built houses, and because of its size, possibly built for a chief. Wells Bailey formally purchased the land in 1874.   A manuscript found at the Kansas Historic Society in 2003, contained an interview with Mr. Bailey, in which he claims to have built the hewn log house in 1870. It is thought that the house was sided with clapboard and “lath and plastered” inside, soon after. During the restoration of the house, in 2012, preservation professionals found architectural clues which indicate that Bailey may have actually constructed the log home from materials salvaged from the abandoned government-built Indian homes that were located on his land.  The Bailey House stands today – a symbol of the transition of two cultures and an important reminder of both the Native American and pioneer heritage of Osage County. For more information, visit wpbaileyhouse.com or email: wpbaileyhouse@gmail.com.