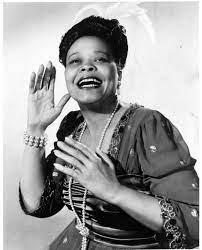 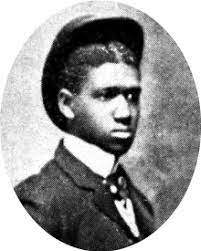 Blues Singer Ada Brown (1890 – 1950) was born in Kansas City, Kansas, on May 1, 1889. Brown is the daughter of H.W. and Anna (Morris) Scott. She is the cousin of James Scott, the noted ragtime composer and pianist. During her career, Brown was billed as “Queen” of Blues,”. She is often omitted from the annals of jazz greats. She was born into a musically inclined family and sang in church as a child before her career in 1910 at Bob Mott’s Pekin Theater in Chicago. It was noted that she worked in Paris and Berlin, then became a regular with the Bennie Moten Band during the early 1920s. From the mid-1920s, Brown did widespread theater tours throughout the U.S. and Canada and appeared in black revues and musical comedies up and down Broadway. Brown was featured at the London Palladium in the late ’30s and appeared with Fats Waller in the film Stormy Weather (1943). One of her last appearances was in Memphis Bound (1945), shortly before her retirement. In addition to her amazing musical talents, Brown was one of the original incubators of the Negro Actors Guild of America in 1936 (67).

James Sylvester Scott (1886 – 1938) is referred to as one of “The two greatest ragtime composers.” Scott fashioned rhythmically ebullient, technically challenging scores that enrich the core literature of classic ragtime. (68) Scott was born in Neosho (Newton County), Missouri, on February 12, 1885. He is the second of six children of James Scott and Molly Thomas Scott, who had migrated to southwestern Missouri from North Carolina after their marriage in 1878. Scott was introduced to music at home in Neosho where his mother passed on her approach to music to her children, teaching all six of them to play the piano by ear. Scott may have studied music at the segregate Lincoln School in Neosho, but, like most blacks of his era, he seems to have taught himself most of what he needed to know. Even finding a piano on which to practice was a problem because the Scotts were too poor to own one. Like the young Scott Joplin, who practiced on pianos in the homes of white people for whom his mother was a maid, the young Scott sought out keyboards in neighbors’ homes, public buildings, and local music stores. Scott performed in Kansas City, and published a song titled, “Kansas City Rag” in 1907. Scott’s career as a ragtime composer got under way in 1903 when Charles R. Dumar’s city alderman, director of the Carthage Light Guard Band from 1885, and owner of Dumars Music at 109 Such Main Street, arranged for Scott to break into the music business. In that year Durmars underwrote the printing of Scott’s Summer Breeze”, originally titled “A Summer Zephyr”, and thus established the young pianist as a published composer whose inclusion reached beyond the saloons. The Carthage Evening Press appeared to have little difficulty understanding the idea of intrinsic musical talent, labeling Scott a “musical prodigy.” (69)

According to his cousin Patsy Thomas, Scott was a small man who weighed about 140 pounds, was diffident and unassuming, preoccupied by his world of music. People called him the Little Professor: He always walked rapidly, looking at the ground, would pass you on the street and never see you, seemed always deep in thought. If anyone spoke to him on the street, he would jump, look surprised and pleased. His parting words would always be, “Will you be home tomorrow? O.K., I’ll come over and play my new piece for you.” Don Scott, James’s great-nephew, confirms the impression of a discreet person and adds a revealing insight: “Yea, I’ve heard several people that knew him. He was a quiet type of man. He loved family, but he was mostly wrapped up in his music. They had a name they called him. They used to call him the Professor, because all he wanted to do was to play music and write music and talk music. (70)

Since the popularity of ragtime faded by the late 1910s, and the zinc mining, which had sustained the prosperity of southwestern Missouri, declined abruptly after World War 1. Most of Scott’s publishing career was already behind him when, by the early 1920s, he moved to Kansas City, Kansas, immediately across the Missouri River from the better-known Kansas City, Missouri. In 1922, when his last rag was published, James Scott was listed in the city directory as living at 402 Nebraska Avenue, Kansas City, Kansas. For the next ten years, during his professional active years in Kansas City, Scott had a solid career as a theater musician, bandleader, and arranger. He worked at three vaudeville and movie theaters: the Panama Theater at 1709 East Twelfth Street near Woodland, the Lincoln Theatre at Eighteenth and Lydia streets, and the Eblon Theater at 1822 Vine Street. Although Scott’s name does not appear in the weekly advertisements of the Kansas City Call for those years, Kansas City musicians say that he was among the top professionals in the black music business (71). Classical ragtime, nevertheless, was associated with important social developments in the age of Booker T. Washington. It was noted that Washington did not approve of the increasingly popular saloons and wine bars; he feared the adverse influence on the morals of Tuskegee students of these giddy, decadent environments in which ragtime was often played. Washington therefore never endorsed ragtime, even if he did declare it less racially offensive than “coon” songs. With that being said, Scott took an active role in the black community affairs, therefore marrying his music to African American ambitions (72) & (73) other Ragtime composer – Westlawn Cemetery, KCK (Section 60, row 20 to 23, no grave/plot #)