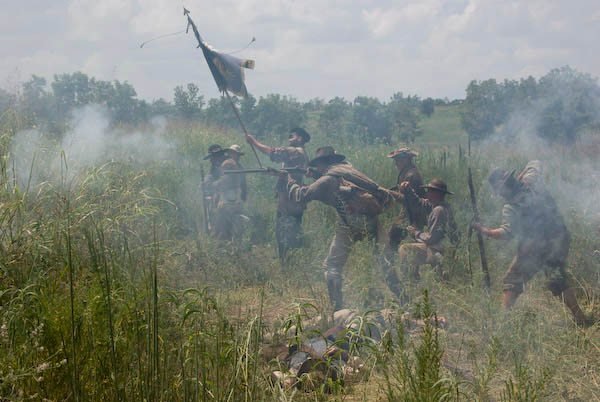 Wilson's Creek was the first major Civil War battle fought west of the Mississippi River, and the site of the death of Nathaniel Lyon, the first Union general killed in action during a costly Southern victory. (This battlefield is located outside of the heritage area.)

The Battle of Wilson's Creek (called Oak Hills by the Southerners) was a bitter struggle between Union and Southern forces for control of Missouri. It was fought ten miles southwest of Springfield, Missouri on August 10, 1861.

When the Civil War began in 1861, Missouri's allegiance was of vital concern to the federal government. The state's strategic position on the Missouri and Mississippi Rivers and its abundant manpower and natural resources made it imperative that she remain loyal to the Union. Most Missourians desired neutrality, but many, including the governor, Claiborne Fox Jackson, held strong Southern sympathies and planned to cooperate with the Confederacy in its bid for independence.

When President Lincoln called for troops to put down the rebellion, Missouri was asked to supply four regiments. Governor Jackson refused the request and ordered State military units to muster at Camp Jackson outside Saint Louis and prepare to seize the U.S. arsenal in that city. They had not, however, counted on the resourcefulness of of the arsenal's commander, Captain Nathaniel Lyon. (Read more of the story by following the link to the National Park Service website.)

In compliance with ADA standards, assisted listening devices are available for use with the twenty-nine minute orientation film in the Visitor Center.