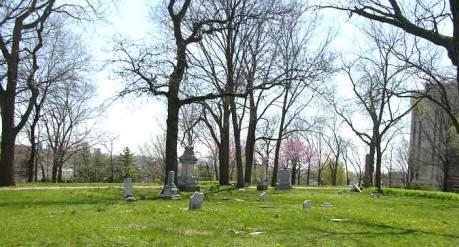 Explore the history of the Wyandot Nation with outdoor exhibits at the Huron Cemetery in the heart of Kansas City, Kansas. Just next door is the Main Branch of the Kansas City, Kansas Public Library. The Library's Kansas Room holdings include collections of Wyandot Indian documents, photographs, and artifacts.

According to history, nearly 700 Wyandots began their journey to Kansas. While camped along the Missouri river, an illness overcame many of them. The dead were carried across the river to a high point, which overlooked the Kansas and Missouri rivers.

This historic cemetery was established in 1843 after the forced migration of the Wyandot Nation from its home near Upper Sandusky, Ohio, under the Indian Removal Act of 1830. The cemetery was given protected status by an 1855 treaty between the U.S. government and the Wyandot tribe.

If not for the impassioned and persistent efforts of Eliza “Lyda” Burton Conley and her sisters Ida and Helena, the cemetery may have long ago been sold to developers.

The sisters spent their lives protecting this spot of land that had been promised to their Native ancestors by the United States government after they were forcibly removed from their homes.

By the late 1800s, as Kansas City, Kansas, thrived in the surrounding area, the cemetery began to be seen as inconvenient because of its location. in 1890 Kansas Senator Preston B. Plumb introduced a resolution to Congress to relocate the cemetery, a measure revisited in 1899, by William Connelly. As the Kansas Wyandots had no recognized legal status as a tribe but the Wyandot Tribe of Oklahoma did, Connelly acquired power of attorney for the Oklahoma Wyandots and proposed selling the cemetery and distributing the proceeds among the Oklahoma Wyandottes while keeping a cut for himself.

Lyda Conley was not going to let anything threaten her ancestors’ burial grounds. In order to use legal methods to fight for the cemetery, Lyda enrolled in law school, and graduated from the Kansas City School of Law in 1902. She was admitted to the Missouri Bar soon after, and the Kansas Bar in 1910. Although Kansas was relatively progressive when it came to women’s legal rights, it was still a rarity for women to practice law.

in 1906, While William Connelly convinced the Secretary of Interior to appoint a commission to facilitate the sale of the land.

Lyda and her sisters, armed with shotguns, moved into "Fort Conley", a structure they built at their mother's graveside. There they lived as public sentiment for the Conley sisters and the cemetery grew.

In June 1907, Lyda began the legal battle that would take her to the U.S. Supreme Court in January 1910, making her the first Native woman to argue a case before the highest court in the land. Although the Supreme Court did not rule in Lyda’s favor, accounts of her argument indicate an extremely passionate, intelligent, and creatively complex legal plea for the continued protection of the Wyandot National Burying Ground.

After Lyda’s loss in court, she and her sisters continued guarding the cemetery though there were many attempts to remove them. In 1912, Kansas Senator Charles Curtis recommended that Congress designate the cemetery a national monument. In 1916, Congress funded its preservation as a historic site. It was placed in the care of Haskell Institute, now Haskell Indian Nations University.

Since Lyda’s death in 1946, there have been other attempts to sell or move the cemetery. Wyandot descendants and local historians continued Lyda’s battle and in 1971, the cemetery was put on the National Register of Historic Places and in 2016, recognized as a National Historic Landmark. It is believed that there are 400-600 bodies buried in Huron Indian Cemetery, though only a small number of the graves are marked.

Lyda and her sister Helena are buried in the Huron Indian Cemetery. Engraved on Helena's headstone are these words, "Cursed be the villain that molest their graves."

(Note: The walkway that leads from the Main Branch of the Library into the cemetery is in extreme disrepair. There is a paved entrance from the 7th Street side of the cemetery, where there are also some permanent interpretive displays. It is recommended that you use this entrance when you visit.)